The last two posts showed how to use networking and to setup a border router configuration. To get a bit more productive the next thing is using one board as a CoAP server that responds to requests from the host system.

At the moment RIOT OS has 4 (yes four!) different CoAP implementations: nanocoap, microcoap, gcoap and libcoap. Two of those are included in the examples as well. They differ in their implemented functions and code sizes… So there’s a tool for every use case. Sadly not DTLS out of the box.

The needed prerequisites can of course vary based on your goals. A minimal setup would be in this case:

Similar to the other examples to the following and flash the image to the second board:

I’ve chosen microcoap as an example here. When the second board boots up you should see the POST and the assigned IPv6 address:

Now you can either use a console based CoAP client like described here or you can use the handy Firefox Add-on Copper: 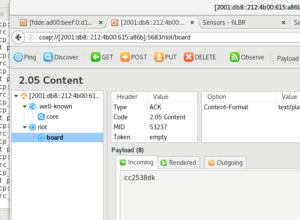