Update on 05.06.2013: Due to a still high interest in this post I added “USB device partitioning” and other small things …

After using my Seagate Dockstar more than one year, a friend moved into town and wanted something similiar for home uses… Now as the pogoplugs are too pricy and old Dockstar’s are pretty rare in Europe (and even then around 60€ used…) I ran into the Seagate GoFlex Net. 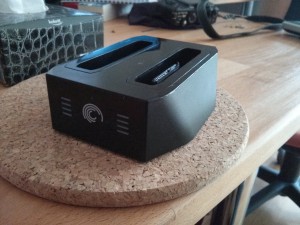 On the hardware side, nothing much has changed there. The GoFlex has just only one USB Port – which is in fact not much. So you shouldn’t use too many USB Hubs and/or devices with much wattage or bandwidth at it. But on the bright side, there is a SATA port on the top which is really useful when you are trying some sort of backup/webserver or download machine…
Another fun part is the nice black case and the 8 LED’s built into the front. They are stacked on each side, so 2×4 LEDs which are fully programmable through the kernel/sysfs. They are used in the Pogoplug software to display the amount of data which is currently lockated on the docked hdds in the top. But who wants to use that crappy software…

So next step was to get debian on that thingy – and again Jeff Doozan is there to help. His scripts, created over a year ago, were fine tuned and loads of other Pogoplug devices are supported now. And they come in very handy even for those who don’t hack hardware every day.
So if you need any help or if you’re running into problems, just visit the forum there: http://forum.doozan.com/index.php

IMPORTANT: I take no guarantee/warranty for this how to, so live with a possibly bricked device. Don’t blame me! (There are some ways and cases, where unbricking is possible, like using a UART/JTAG cable)
It might be also very useful, to rescue a print out of your U-Boot environmental settings as soon as you can play with them – just in case!

To get started, power your GoFlex up, connect it into your LAN with web access. The first goal now is to get access to the device via SSH. It is currently booting the PlugOS software and there is atm no direct way to get access to it.

As I bought this device I read across some german forum and found out, that the PlugOS closes the SSH access with GoFlex Net Build dates around july/august 2012. So, yay, I got a pretty new one with no acces. Bad luck, anyway:

http://knowledge.seagate.com/articles/en_US/FAQ/214571en?language=en_US
Seagate themselves are pointing out here how to get access to the device…

So go the the pogoplug website and create yourself an account if you don’t already have one.
After logging in, your pogoplug device should appear on the website. Find the settings tab (well hidden – I needed my girlfriend to find it for me…)

Important: IF this option (enable SSH) does NOT appear on the website, there is potentially something wrong with your routers firewall. (blocking ports, no uPNP – depends). If the SSH port 22 is blocked, its blocked. (found here: GoFlex net missing from LAN

After that, you should be able to SSH into the device:

So Jeff has written scripts for different things:

To be up-to-date, I’m using the newest Debian called “Wheezy”. There are also scripts available for bootstraped “Squeeze”. These scripts also automatically update the U-Boot bootloader to the latest version.

First you should create yourself a root device (i.e. USB memory stick) where the rootfs should be placed with:

You can see all available partitions on that device with the “p” command. Be sure to remove all old partitions from the stick/disk with “d”.
I’m using a 16GB USB 3.0 USB stick from Lexar, which then looks like:

Another step is to change the file system id of the second partition to swap. The last step is to look at everything again with “p”:

Save everything with “w” and exit.

Now you need to make everything ready for the script and start it:

The installer will ask you if you want to disable pogoplug services, which is appreciated and normal:

But after installing packages I ran into following error:

is too old to compile/install some of the packages correctly.
This is a huge problem, because at this point the U-Boot Bootloader got updated, but no working debian filesystem was installed, so rebooting the GoFlex will either end in no boot of the debian device nor getting access via SSH – because of the disabled pogoplug services.

To fix this I needed to download an version of Jeff’s/Dave’s Rescue System, available in Version 3 here.

Download it, copy it to the first non-swap partition (ext2) on the usb drive and untar it there. After that, plug the usb drive back into the GoFlex USB Slot and poweroff/poweron. Wait some time until the LED turns off and then, wait some time again and SSH will be back online. You should be now running the rescue system, a stripped down debian version, from the plugged USB drive.

But that is not our goal, just a workaround to get a newer kernel/environment. So the next step is to install the Rescue System to the NAND memory inside the GoFlex, so that we can always use it.
Some explanations and the full story can be found in Jeffs Forum Rescue Thread.
To install the rescue system do:

Now the rescue system will be hard written into the GoFlex, so after finishing that, reboot and unplug the USB stick. Delete all files from the second ext2 partition (the old rescue system) and plug it back in. Make a reboot and you now should be running the hardcoded Rescue OS in combination with a clean USB stick.

Doing so brings us the following error:

The rescue rootfs is mounted read only, as easy be checked by:

So you need to make it writable, too:

Now we need to remove the debootstrap, as Jeff mentioned in this Thread

Now start the script again by

and get some coffee. Depending on your internet connection and the speed of your USB drive, it may take a while…

After a lot of this and that

To print out your U-Boot environmental settings, you can use the command

If you have also overwritten your old uboot config, you should set your MAC address to the old value or just choose a new one

This should be also valid for the Seagate Flex Home. Additionally, the original oldschool Dockstar/Sheevaplug use the arcNumber 2097.

Last step should be to update and upgrade your current package list (and reboot):

A couple of things you should possibly think of:

To give him super user rights, add him to the “sudoers” file using “visudo”: